Our office, Feldmann Law Firm, had an honor to gave an interview to New York Times explaining how to buy a property in Brazil.

A Seven-Bedroom Villa in São Paulo

This modern, seven-bedroom house sits on a third of an acre in Cidade Jardim, an upscale neighborhood in the South Zone of São Paulo, Brazil, just west of the city center and the Pinheiros River.

Built in 1976 and renovated in 2018 and 2019, the approximately 8,600-square-foot villa is awash in natural light thanks to several glass walls and sliding doors. Outside, lush landscaping creates a sense of privacy overlooking São Paulo’s skyline. The house is “surrounded by green,” said Luiza Cazarin, a partner and the director of international relations with Axpe Imóveis Especiais, an affiliate of Christie’s International Real Estate, which has the listing.

“This property is an oasis that offers peace and quietness amid the chaos of such a busy city,” Ms. Cazarin said.

The villa is clad in peroba, a Brazilian wood known for its durability and vibrant color, said Luc Bouveret, who is selling the home with his husband. Peroba also lines the outdoor pool deck, which sits at the foot of the house’s covered patio.

From the entrance, a hallway with lacquer floors leads to a roughly 1,600-square-foot, L-shaped living and dining room, with whitewashed, reclaimed-wood floors, several seating areas and sliding glass doors that open to a broad, east-facing balcony, Mr. Bouveret said. Furnishings — a combination of French antiques, contemporary pieces and indigenous Brazilian tribal pieces — are available by negotiation. 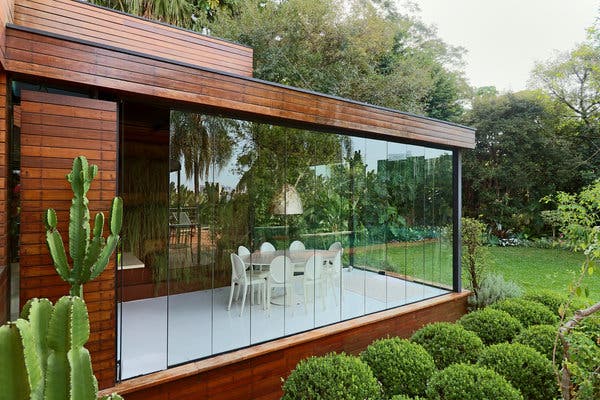 To the right of the entrance hall, several steps lead down to a half bathroom with Italian marble walls and a rock-crystal sink, and to a combination TV room and office. To the left, the kitchen has an eating area and a bright color scheme. A second dining area in a veranda adjoining the kitchen has glass walls on two sides and a third wall draped in Brazilian flowering plants.

A staircase leads up to five bedrooms — three en suite and two that share a bath — four of which have panoramic city views. Downstairs, on the garden level, a 1,400-square-foot, rectangular room can be converted to a guest apartment or office because it has a separate entrance, Mr. Bouveret said. There is also a bathroom with a shower, for the pool, on this level.

The house includes two spaces currently used as staff quarters: a bedroom and bathroom above the kitchen, and a studio apartment with a kitchenette in the garden level. The property also has a six-car garage, an attic and ample storage.

Cidade Jardim (or “Garden City”) is among the most affluent neighborhoods in São Paulo, a city of about 12 million residents near the Atlantic coast of Brazil. It is home to São Paulo Jockey Club, which hosts horse racing as well as outdoor concerts, and Shopping Cidade Jardim, a sprawling luxury mall. São Paulo/Guarulhos-Governador André Franco Montoro International Airport is about 25 miles northeast.

São Paulo’s real estate market is entering a phase of recovery after years of falling sales volume and prices, said Eduardo Zylberstajn, the head of research at the Institute of Economic Research Foundation (FIPE), which tracks Brazil’s housing market. 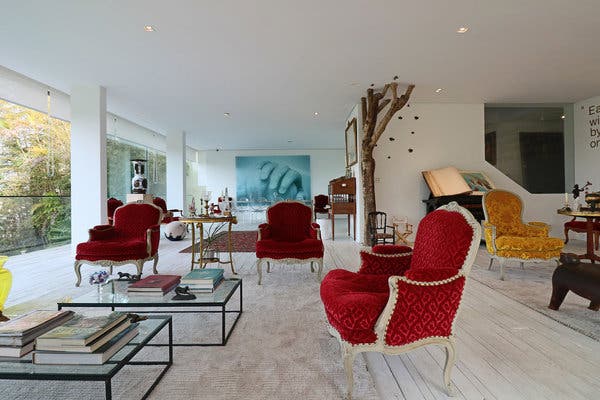 Home prices in São Paulo have fallen roughly 15 percent since their peak in 2014 when adjusted for inflation, he said. Between early 2016 and late 2017, a national economic crisis and unstable monetary policy led to a downturn in transactions. Interest rates had risen to around 14 percent, discouraging investment, and banks tightened credit. Since then, as interest rates have decreased, sales have rebounded.

A drop in the interest rate this summer, to 6 percent, is expected to push prices higher, Mr. Zylberstajn said.

Guilherme Makansi, co-owner of Anglo Americana Imóveis, a luxury brokerage in São Paulo, said low-cost homes “suffered less” during the economic crisis, because government incentives encouraged construction of affordable units and helped low-income home buyers. But the luxury market “cooled off” as those buyers waited out the high central-bank interest rates, he said.

Mr. Makansi said the market is now “in recovery,” with the total number of units sold in São Paulo having grown by 32 percent between June 2018 to June 2019 compared with the 12 previous months, according to the city’s real estate union. That volume approaches precrisis figures from 2012 to 2013, he said.

Marcello Romero, CEO of Bossa Nova Sotheby’s International Realty, said his firm lost clients during the crisis as high-income buyers put off purchases in São Paulo while the economy stabilized. But he has seen renewed activity in the past six months. “They are starting to come back,” he said.

That is due in part to more development, Mr. Romero said, much of which has focused on smaller units thanks to government regulations aiming to meet demand by increasing density. Mr. Romero said new properties have displaced older ones as the city’s most desirable type of housing, and prices have adjusted accordingly. “Ten years ago, the new developments were cheaper than the secondhand. Now it’s the opposite,” he said.

As for the high end, Martim Cazarin, a partner and the commercial manager of Axpe Imóveis Especiais, said São Paulo’s best neighborhoods include Itaim Bibi, Cerqueira César, Jardim Paulista, Jardim América, Jardim Europa, Vila Nova Conceição, Vila Olímpia, Pinheiros and Vila Madalena. The average price in these neighborhoods is around $371 a square foot, with luxury properties fetching between $650 and $1,860 a square foot.

Who Buys in São Paulo

Mr. Romero said property investors and hedge funds buy real estate in São Paulo, but that he hasn’t encountered any regular buyers since 2014.

Mr. Makansi said his firm’s international clients have historically come from the U.S., Portugal, Germany, France and, in a smaller scale, Latin America, including Argentina. But the most — about 88 percent — were Brazilian. In the past six months, his firm has seen buyers from France and Portugal.

Mr. Cazarin estimated his firm has not had any foreign clients in the past three years.

“Foreigners can acquire land, houses and apartments in Brazil,” Mr. Feldmann said, but there are limits on where and how much they can own. Properties on the coast and bordering other countries face restrictions, for example.

Mr. Feldmann said notaries process real estate transactions. Hiring a real estate lawyer isn’t required, but highly recommended, at a cost of around 2 percent of the purchase price. The lawyer can perform due diligence and help with “avoiding frauds, scams and problems that may undermine the legal security of the transaction,” he said. 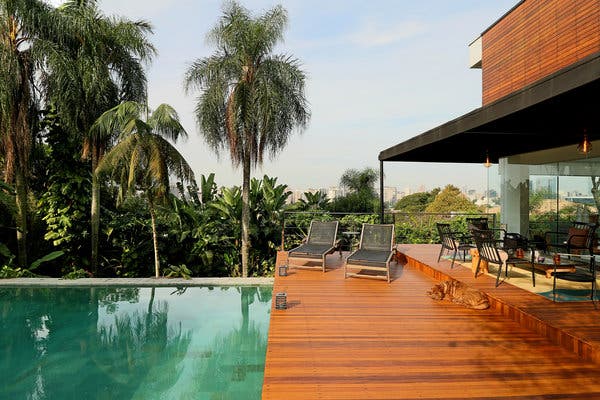 Payment for a property can be made in foreign currency or Brazilian reals, but the price must be registered by the notary in local currency.

The sales commission, paid by the seller, is 6 percent of the property price, Mr. Makansi said, though Mr. Cazarin said it can sometimes be negotiated to 4 percent.

The buyer’s closing costs amount to around 10 to 15 percent of the purchase price, Mr. Feldmann said. These include the notary’s service fee, legal fees, payment for processing the deed and registration of the property transfer, a municipal property purchase tax, a tax levied on financial transactions and a real estate transfer tax.